In the brave year of 2012, the Lupin III franchise has become a well oiled machine, pushing out entertaining, but usually formulaic, TV specials each year. But way back in 1971, the Lupin franchise was just cutting its teeth on anime. After that great pilot film in 1969, Lupin was finally green-lit for a TV series in 1971. While the second series more or less set the tone for the franchise for years to come with its character designs and music, the first series is not one to overlook.

What one immediately notices about the first series from its promotional images is its decidedly more realistic artwork. I don’t mind the more cartoonish designs of the second series, but they oftentimes look a bit too rushed for my tastes. While certainly cartoonish, there’s a nice realistic–and somewhat mean–cut to the designs in the first series. Characters are constantly smirking, and look as if there’s always some ulterior motive to their actions. Character designer Otsuka Yasuo’s obsession with realistic vehicles, weapons, and other items also bestow the series with a sharp sense of realism. But you don’t need another anime blogger telling you that.

Another thing one notices about the first TV series is how relentlessly violent it is. Anyone from double crossers, henchmen, and unfortunate guest characters are routinely gunned down or met with other unpleasant ends multiple times per episode. It only takes two episodes for the show to nearly burn a character to death. Violence is–obviously–nothing without sex, and while the first Lupin III TV series isn’t a porno movie, Fujiko’s bare breasts make guest star appearances quite often. But the show’s sexuality isn’t just restrained to the flashing of tits. The show’s approach to relationships is somewhat mature: Lupin actually kisses–and at times has his way with–women instead of hopelessly drooling over them, and Lupin and Fujiko actually go on outings that resemble dates. This isn’t to say that the show is a sensitive, mature and realistic portrayal of romance, but it just demonstrates a refreshing portrayal of adult characters, especially for a cartoon made forty years ago.

Simply, the show has a very distinct adult atmosphere about it–far more than any given anime made today. It gives the show a nice edge, and one that I find very compelling. However, a show can’t get by on atmosphere alone, and while there’s certainly something to the stories in this first TV series, there’s also something off about them. 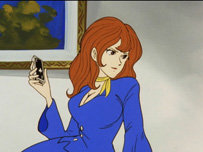 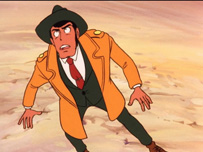 The show boasts some legitimately well written episodes: The famous magician episode is solidly put together, clever and has a convincing denouement that keeps things solidly grounded in reality. The jailbreak episode is also quite good, mostly for its absurdity and the depth of its meanness towards Zenigata. The episode where the gang steals a jewel out of a dead mob boss’ body is just a well told caper, complete with elaborate scheming and double-crossing. The episode with the crazy bridge terrorist is also quite good, highlighted with its damsel in distress and crazy criminal mastermind.

Other episodes don’t fare so well, however. The series’ third episode featuring a mad scientist, a den of assassins, a “witch”, and a giant missile has all the great ingredients of juicy pulp fiction, but falls slightly short. The episode featuring Mamo Kyousuke–the crazy time traveler out to kill Lupin–attempts to recapture the brilliance of the magician episode by presenting the viewer with something supernatural that one expects to be explained in the end through conventional logic. However, the episode unfortunately doesn’t offer a satisfactory conclusion in that regard. It does end well, but not from a story perspective, and feels like something of a cop out. Some of the series’ lesser episodes in general are either abound in strange leaps of logic, or just don’t have enough time to explain themselves, leaving them slightly unsatisfying in the end, but are suitably entertaining.

That said, the show’s lack of conventional logic bestows the whole affair with a nice off-beat feel, which is most likely not intentional, but certainly adds to the show’s flavor. Whether or not this makes the show wholly entertaining is another story, but it is compelling.

In the show’s somewhat flawed pursuit of realism, it does a few interesting things cinematically. A couple examples: The show’s third episode has a pretty good point-of-view shot as Lupin and Jigen dive into the sea, and the show’s ninth episode has a moment of well-rendered dynamic shooting as the camera follows a goon ducking for cover. The show really stretches its budget, going out of its way to deliver movie caliber gunplay, fist fights and car chases with TV money. The show will also surprise with a really well framed shot every now and again. Japanese animation is renowned for being cinematic in its early years, and it’s quite clear that Lupin III was blazing that trail quite early on.

But for all the effort the show lavishes on characters, weapons, and its generally cinematic feel, it kind of drops the ball when it comes to settings. A good number of episodes take place in log cabins and in forests–places without much character or anything interesting. While the fact that all these crazy stories are happening in the middle of nowhere furthers the show’s off-beat atmosphere, it doesn’t particularly help things. That said, as the show goes on, the characters do start doing their thing in actual cities and the like. 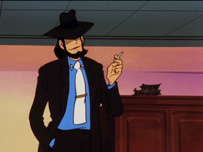 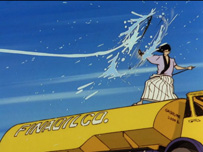 One interesting thing is how the series plays up the whole Lupin Is A Big Rich Criminal angle. In this first series, Lupin just has mansions he hangs out in. In a few episodes, he has a whole crew of guys at his disposal, and there is even mention of a Lupin III syndicate. Lupin as we know him today is quite the talented crook who takes on big jobs, but he only has three other guys, one of whom always betrays him. As such, this first series’ portrayal of Lupin is quite the departure.

Similarly, at this early stage, there isn’t much in the way of a formula. There are episodes where Zenigata doesn’t appear at all, and after the show takes a few episodes to introduce Goemon, he only appears sporadically at best. There isn’t even a MacGuffin to steal half of the time. This keeps the show fresh and interesting, whereas the later stuff feels a bit too by-the-numbers.

But then, everything suddenly changes.

Character designs become more goofy and simplified, the show’s body count drops to zero, and the tone generally becomes significantly more lighthearted. While the show starts heading in this direction over the course of a few episodes, everything becomes clear the very moment Fujiko walks in with a Goody Two-Shoes girly-girl dress and short hair, as opposed to her funky 1960s getups and seductive flowing locks: That motherfucker Miyazaki is behind all this.

I can’t say that I hate Miyazaki–I actually haven’t seen many of his films, and he is certainly a master of his craft but… his style is simply too safe. That said, these later episodes are probably easier to watch than the earlier ones. They are paced well, flow well, and the storytelling is very clear and solid.

But despite these later episodes being technically better put together, one really starts to miss the bite of the earlier episodes when Zenigata begins to yell dialogue such as, “I’ll get you next week, Lupin!”, like a Saturday morning cartoon villain. Lupin’s perfect balance between goofy and cool shifts more towards the goofy, Jigen’s brain cells take a hit, and Fujiko loses all of her personality. Goemon remains mostly the same, but he doesn’t show up very much anyway. Some episodes get really dumb, like the one where Lupin fights a crime-fighting computer. I do however like the episode that ends with everyone dressed as Lupin, though. 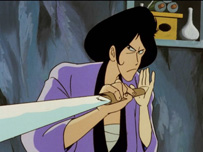 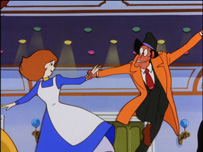 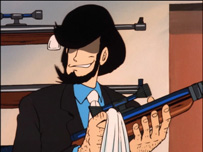 While the show is a bit too goofy in its second half, both the show and the franchise start to take shape. That said, like in the early episodes, there is still healthy variety, such as solo Lupin episodes, or episodes with just Lupin and Jigen. And while these later episodes do take place in the more concrete setting of Tokyo, the franchise has yet to globe hop like it does in later entries.

Incidentally one interesting thing about the show’s looseness with the characters is how rarely Goemon is around. Even after he becomes part of the group, his appearances in episodes are quite noticeably few in number compared to Lupin’s other partners. I like Goemon quite a bit, but I always felt that his inclusion into the group was a little strange, so him just being around when the story demands it is the perfect way to use him.

Most Lupin productions after the franchise’s iconic second TV series have music backed by the talented Ohno Yuuji, but this first series’ music is by Yamashita Takeo, of Giant Robo fame. His score is very strange, and changes over time as the series starts to figure out what kind of atmosphere it wants. Music in very early episodes is often strangely out of place, with bizarre songs like the infamous Nice Guy Lupin backing scenes. The show uses vocal songs quite often in place of traditional instrumental background music, usually with nonsensical English lyrics. I suspect the folks in charge of music thought that English background music would be cool and make the show sound somewhat exotic, and as a result classic lyrics like “LUPIN, GO MAN, LUPIN, WALTHER P-38!!” were born. The use of these songs does give certain scenes a distinctly wild falvor that fits just right, but when the show’s about to cut to a commercial to the backing of a woman screaming “LUPIN LUPIN LUPIN” as if she’s having an orgasm is kind of strange. After a while, the show learns how use its score decently, but it’s still very rough.

And rough is the perfect word to describe this show. Everything isn’t quite there yet, and that makes the green jacket Lupin series somewhat compelling, but at the same time somewhat awkward. Were the show a mix of the polish of the later episodes mixed with the grime of the earlier ones, it would be perfect. That said, the twenty-three episodes that exist in the real world aren’t bad at all, and I ran through them pretty quickly, eagerly wanting to see what the show would do next. Given its roughness, I wouldn’t recommend it to people just getting into Lupin, but if you’re a fan and haven’t seen it, it’s worth a look. Just don’t get angry, and stay cool, man.

You gotta… feel it.