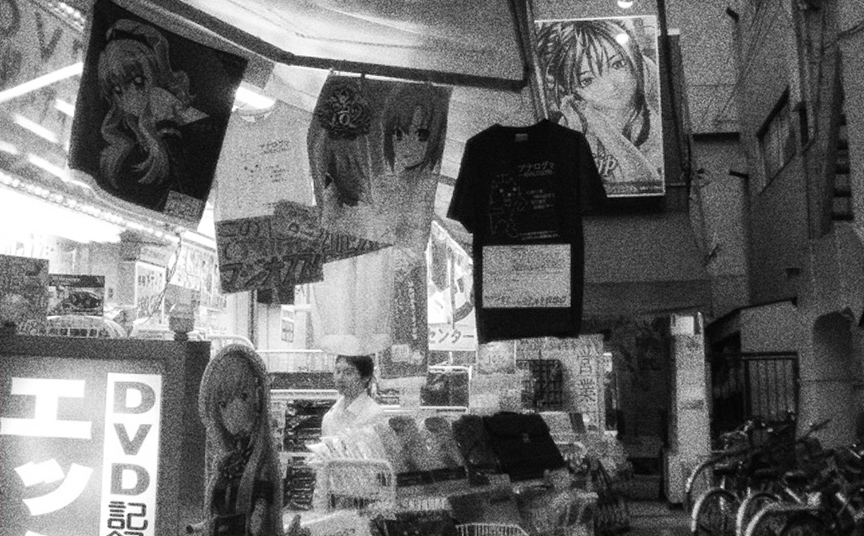 This period of time is especially nostalgic for me, as it was when I made my big move to Dai Nippon, and became a contributing member of society. As a result, the amount of titles I watched… dropped significantly.

Among those choice few titles, let’s see what stuck in the memory. 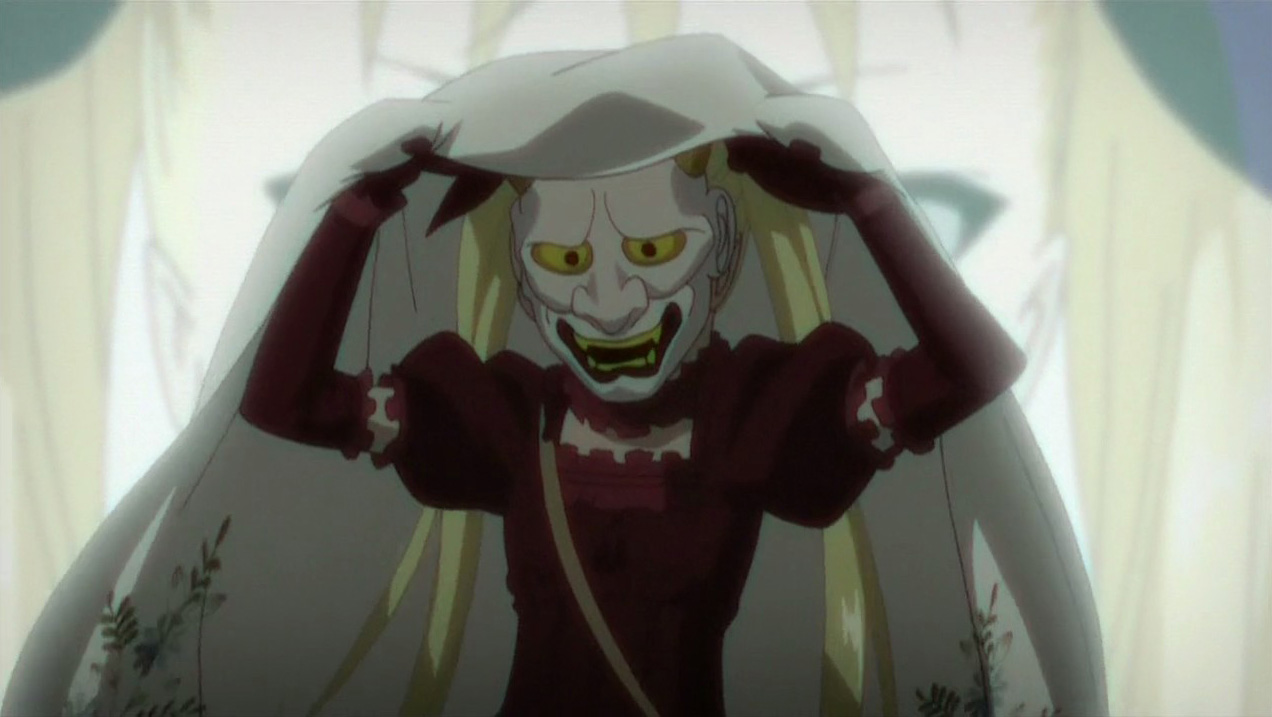 Dance in the Vampire Bund
I hesitated to put this on here as it continues to be reviled as one of the creepiest anime titles made in the last decade. But whether or not you are titillated by the young heroine and her regular states of undress, Dance in the Vampire Bund’s mix of eroticism and the supernatural is a nostalgic nod to classic titles like Wicked City. Except in Bund, the story is way more put together. The anime goes the extra mile and doubles down on its retro flare, using a cover of Rebecca’s 1985 hit Friends as the opening. That said, despite the retro aesthetic, the other reason I hesitated to put this on here is because the anime just wasn’t that great on TV. It suffered from very apparent production issues and was not given the care needed to properly adapt the action-packed manga. That said, it was a welcome return to late-90s/early-2000s Shinbo, with lots of dark, moody shadows and stylish fame layouts. I am not sure if I ever saw the completed Blu-ray cut–that may be worth watching again.

Highschool of the Dead
Okay, so in the wake of recent events it has been confirmed that Madhouse is exactly what its name suggests, but even so, they were doing some pretty awesome shows in the first decade of this millennium. Highschool of the Dead was the perfect mix of lurid fan service and dynamic, gory action. While it never actually ended, its visceral over-the-top nature and amazing production values came together to create a strangely compelling cartoon. 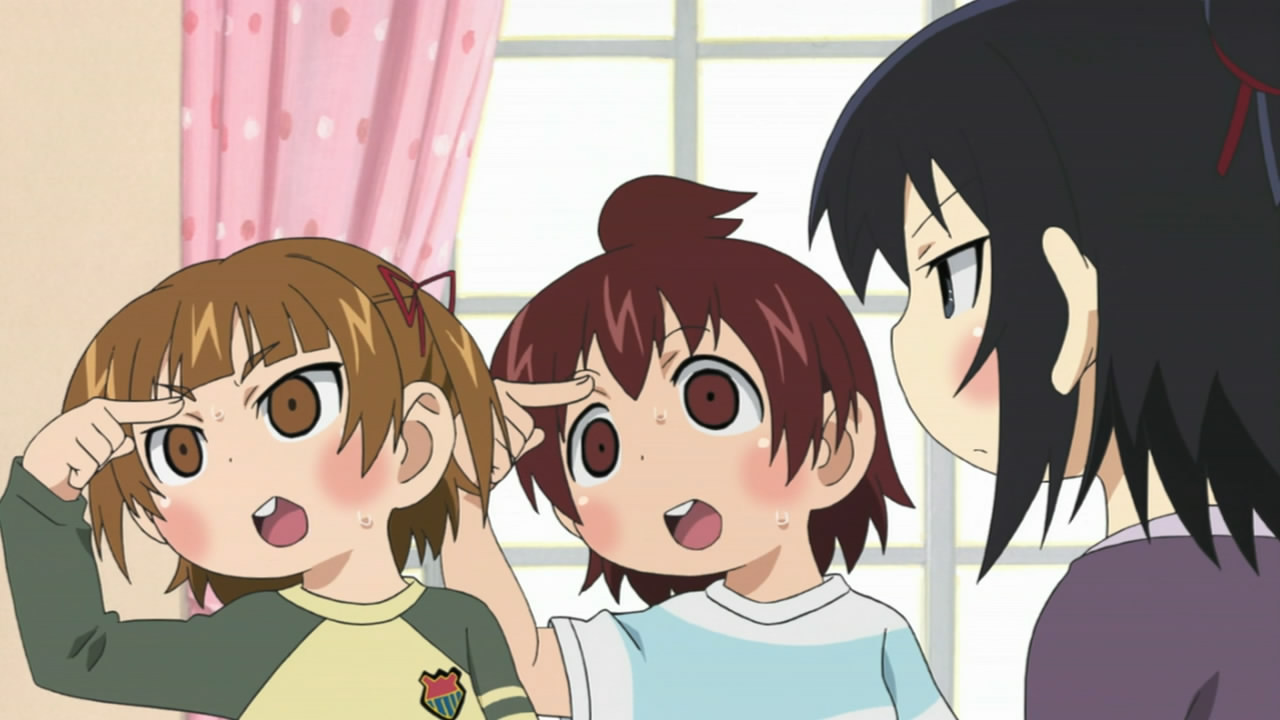 Mitsudomoe
I love crass bullshit, and boy was Mitsudomoe crass. It reminded me of when I was in elementary school. These sisters were dirty, and so were the classmates. Maybe they also had a single dad who was regularly mistaken for a pedophile? Anyway, this is the kind of shit I can watch over and over again, so I think I should. Minami-ke is good–like really good–but this may be better. 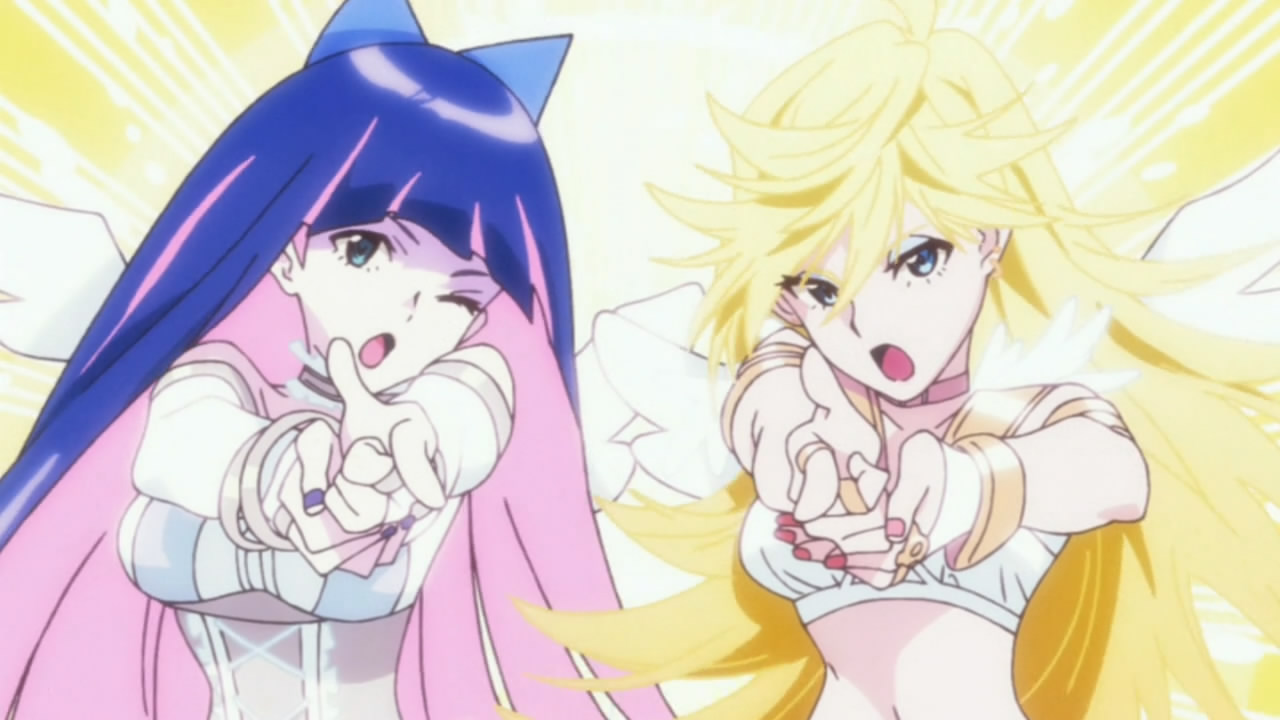 Panty & Stocking with Garterbelt
Boy was this a fucking show. Just right around when all the nerds were getting into Twitter, this thing appeared and blew all the anime bloggers’ minds. Panty & Stocking was Gainax’s final hurrah, and as a showcase of kick-ass animation, and crass, irreverent humor, I would watch the shit out of it again–that’s all there is to it. 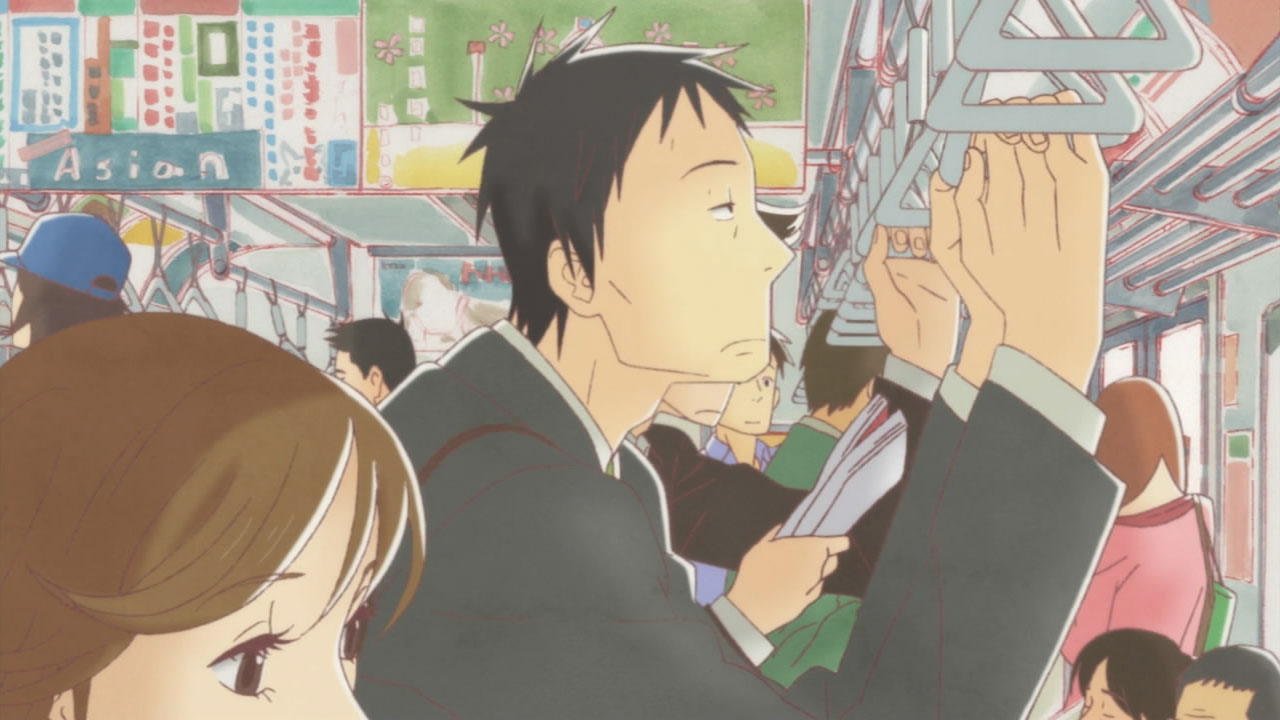 Bunny Drop
Yeah, I would watch this one again. While I realize the Bunny Drop manga finds itself in heavy Problematic Territory during its second half, the material that the anime covers is heartwarming and down-to-earth. Also, reading the plot description just now, I forgot that the tired and old looking main character is… 30. 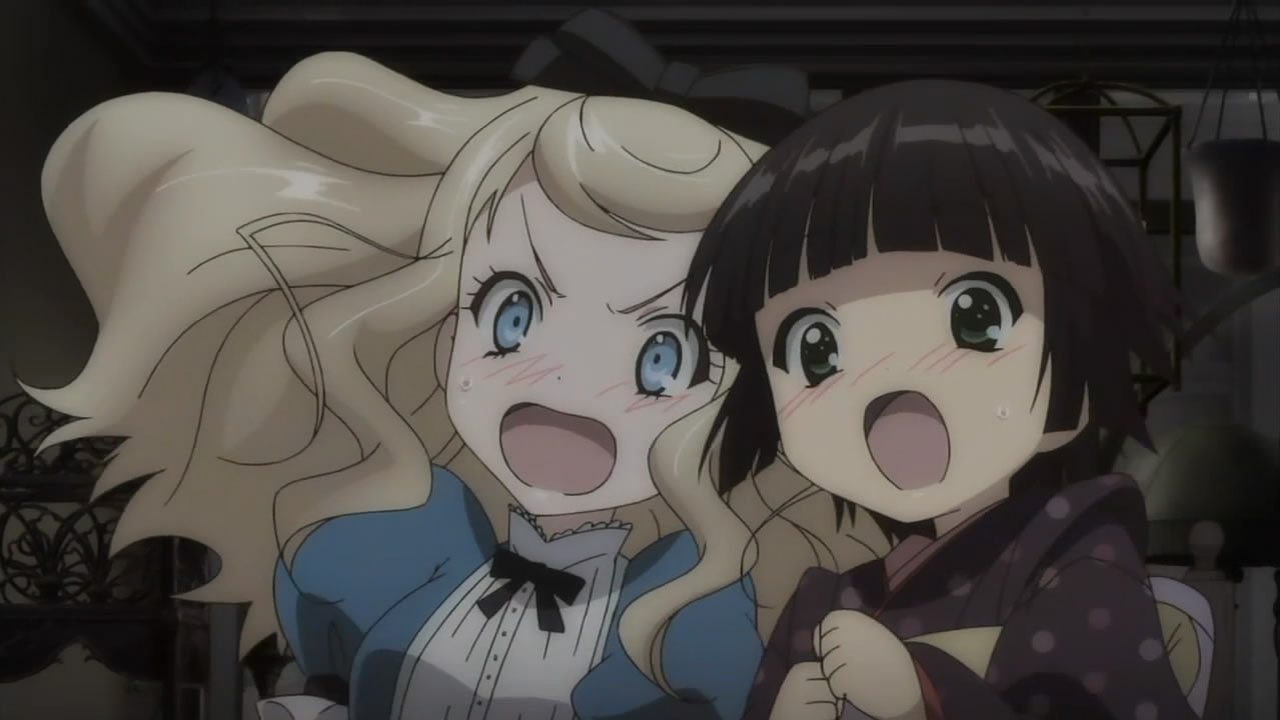 Ikoku Meiro no Croisée
More so than the anime, I would actually like to go through the manga for this one again now that I have a better grasp of Japanese. That said, the anime for Ikoku Meiro no Croisée worked, because rather the adapt the material straight, they added a lot of their own stories–a welcome move, given the manga ended unfinished, and will never be concluded due to author Takeda Hinata’s unfortunate passing in 2017. While the look of the anime isn’t quite on par with the elegant artwork of the manga, the show does look good, and manages to create a warm atmosphere with its colors and lighting. 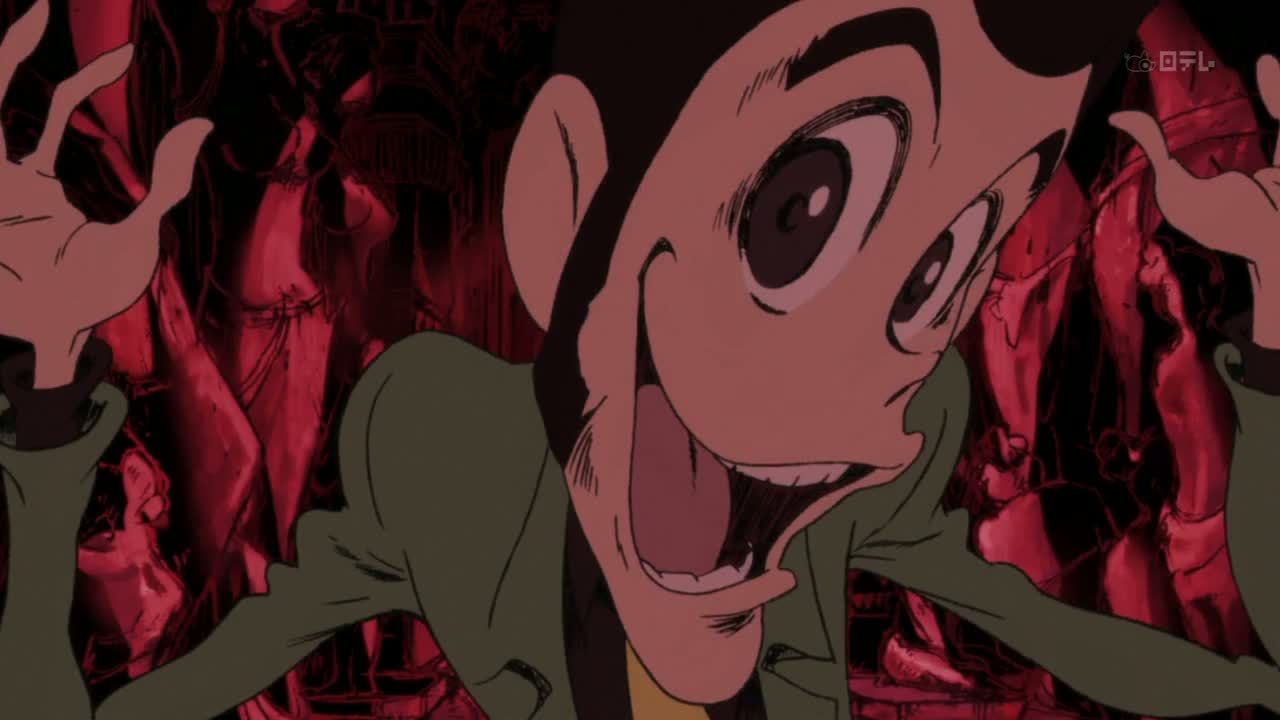 Lupin the Third: The Woman Called Fujiko Mine
My hopes were really high for this one. The Woman Called Fujiko Mine was the first Lupin TV series focusing solely on another member of the Lupin gang who was not Lupin–Fujiko. Also, it boasted a sick visual motif via the pen of Koike Takeshi, and on the whole looked like it would be a throwback to the dark and twisted world that defined Monkey Punch’s original work. More than anything, I was just looking forward to weekly heists that switched the roles, putting Fujiko in the spotlight rather than Mr. Sideburns. Unfortunately, Okada Mari had to jump in and screw it up with some half-baked plot, preventing the series from having the sort of fun it could have had. With that said, as-is, the series is quite fun–but I would have preferred one-off weekly heists and kooky stories through to the end rather than the dribble we got for this one’s finale. You can find my full thoughts here. 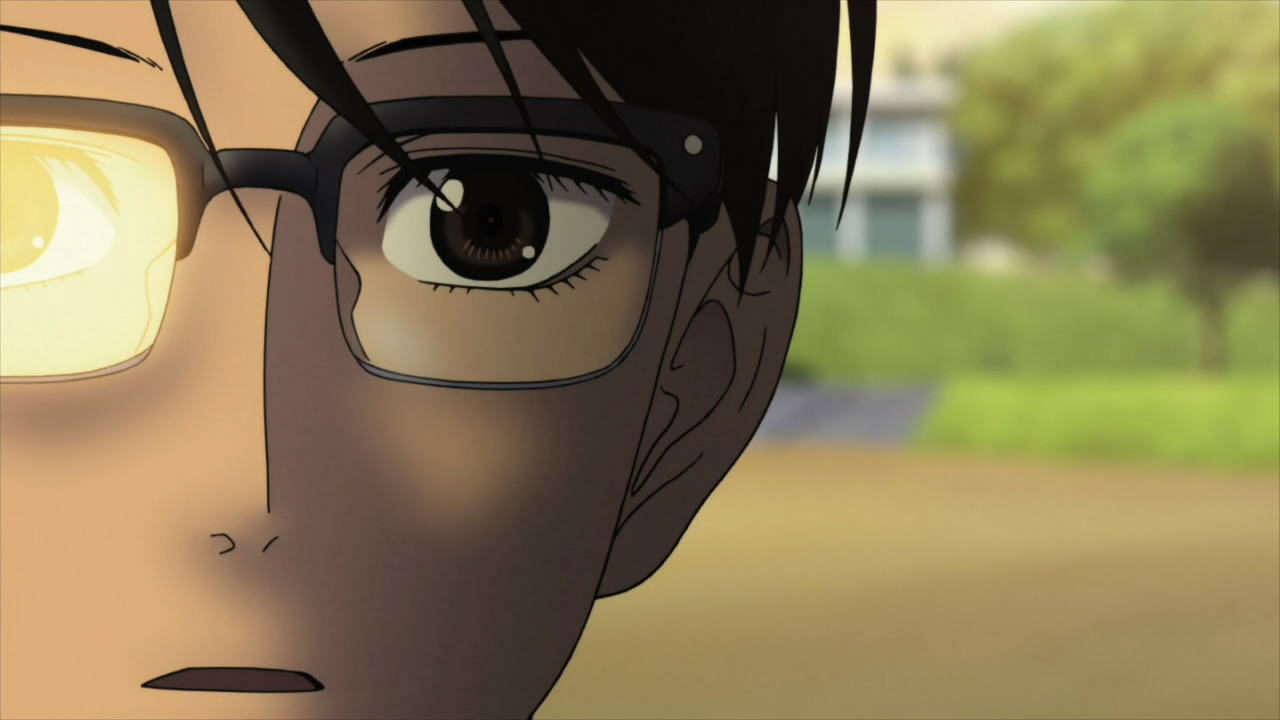 Kids on the Slope
This one was set to be the killer app of the 2012 spring season–Kanno Yoko on music, Watanabe Shinichiro on direction, and Maruyama Masao’s new studio on production. Of course, given the premise, I wasn’t expecting a slick action-packed masterpiece like Cowboy Bebop, but I was expecting something well produced and thoughtful. While Kids on the Slope was well done, I remember the story feeling very disjointed, and leaving me feel as if I was missing something. That said, it wanted to do the right thing, so I would give it one more watch. You can see if the above assessment matches up with my initial thoughts here. 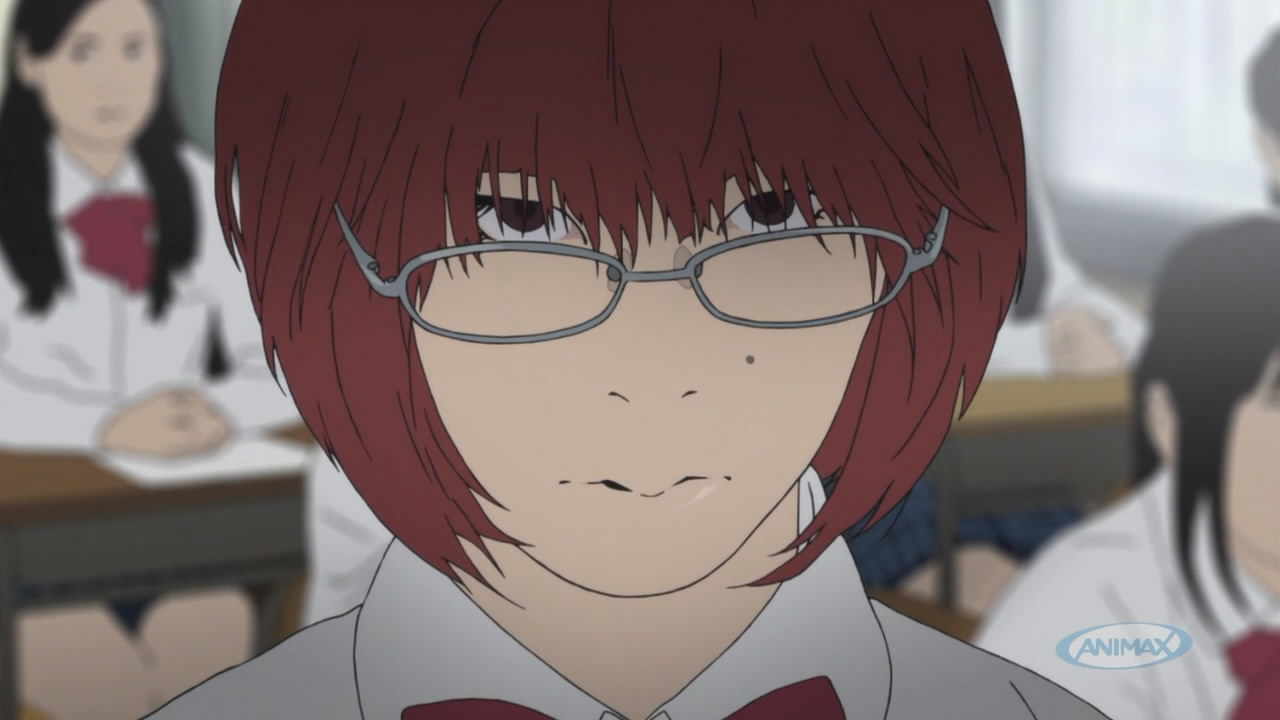 The Flowers of Evil
The Flowers of Evil was a super hot topic on the developing Ani-Twitter scene and dying anime blogging scene when it dropped. With its ultra-real rotoscoped animation and glacial pace, the show earned the ire of many fans–especially those of the original work. I, on the other hand, ate this up. The drab color palette, detailed depictions of countryside decay, and the overall dread that permeated throughout the atmosphere sucked me in. Teaching junior high school students in rural Japan probably helped me relate to the setting more than others, though. And contrary to most, I loved the show’s realistic designs and sense of lethargy, which went a long way to make the twisted developments of the show feel even more real. I went ahead and read the original work after the show concluded, and loved it as well. While the anime does cut off pretty early into the story, it stands well enough on its own as a twisted tail of youth. Making more would ruin it.

No Matter How I Look at It, It’s You Guys’ Fault I’m Not Popular!
This one cut deep, salted the wound, and cut deeper. Like, I had a hard time watching certain scenes of this show. That said, given it came out about six years ago–and now that I have more distance from when I was like Tomoko–I think I could probably give Watamote another chance without flinching. I wrote about the series when it dropped here.

Kill la Kill
Much like Gurren Lagann, despite being a red-hot show, I only saw Kill la Kill once when it hit, and haven’t gotten around to revisiting it. This is another one that I would likely rank as a favorite, I just need to give it a few more spins. With far less deaths, Kill la Kill was quite lighthearted compared to Gurren Lagann, but it still had the same burning spirit, and all the characters were super interesting and engaging. Design-wise, the show hit the mark higher than Gurren Lagann, with everything down to its typefaces looking slick.

With four years covered, I’m doing twice as well than the last post. One more of these should suffice to complete this series–keep your eyes on this space!